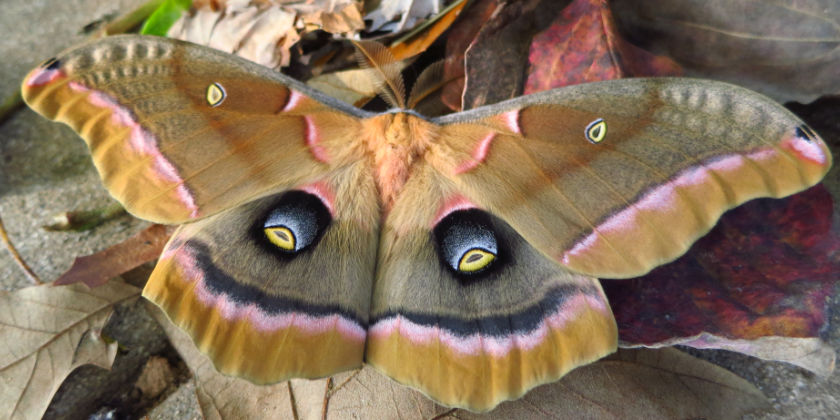 Albert was a moth. Of course, he didn’t know he was a moth. All he knew was he had to go towards the light. He didn’t know why, he just had to do it. There were a lot of unanswered questions in Albert’s life, but Albert never asked any. Albert was a Polyphemus Silk Moth so even if he’d thought of any questions, he didn’t have a mouth through which to ask them. Nor had he learned to write, so that wasn’t an option either. It’s very hard to write when you only have wings and a brain the size of a pin-head.

But intelligence isn’t everything. What Albert lacked in smarts he more than made up for in looks. Yes, Albert was a damned good looking moth. Which is just as well, because he was on the lookout for a mate. Not the sort of mate you find down the pub, but one he could fertilise, which is something one’s drinking buddies would normally object too. Except for Martin. But forget about him, we’re talking about Albert. These were Albert’s directives. Follow the light and shag another moth. He wasn’t distracted by the thought of food, as he couldn’t eat. (You may remember, poor old Albert doesn’t have a mouth.)

He’d had a mouth as a caterpillar, and made good use of it. He’d spent pretty much all of his youth eating. In fact in the two months he’d spent as a caterpillar, he’d managed to consume eighty-six thousand times his body weight. It was just as well, because if he’d been an anorexic caterpillar, he’d not last a day as an adult. It was lucky Albert’s brain was so small, because if he’d paused to think about it for a moment, he might get a bit worried about his lack of mouth. Not that he’d have been able to complain about it to anyone.

Earlier in the day Albert had been dozing. He was perched in his favourite oak tree, when he felt the branch begin to vibrate. Out of pure reflex Albert spread the full fifteen centimetres of his wings.

Edna was a grey squirrel. The unexpected appearance of a dog had caused Edna to drop her acorns and run up Albert’s tree. Edna soon forgot about the dumb dog snuffling around the base of the tree, when she caught sight of Albert. There he was, juicily lying on the branch she’d just climbed up. As she crept towards Albert, her lunch time snack suddenly turned into the hairy face of a predator with piercing yellow eyes. Edna got such a fright she fell off the branch, hitting the ground with a dull, damp thud. Edna was stunned and could see stars. This was a shame for Edna, as that dog may have been dumb, but it was an opportunist. It knew not to leave a stunned grey squirrel waiting. And that was the end of Edna, leaving Albert to successfully find a mate and shag himself silly.

Two days later Albert was dead. Well what did you expect? Polyphemus silk moths only live for a few days. I told you they couldn’t eat.